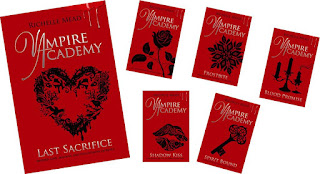 So, I read all the VA books right after eachother and decided it would be easier to just do a review of them all together. As to not make this review too long by telling what happened in every single one, I'll just do a overall impression.
Vampire Academy by  Richelle Mead.
It's about 17 year old Rose Hathaway. She's a Dhampir who's training to be a guardian for Lissa Dragomir. Her best friend and a Moroi princess.  When Rose and Lissa returns to St. Vladmir's Academy after years on the run they both have to catch up. Dimitri Belikov becomes Rose's instructor and they find themselves in a forbidden romance.
The books are told from Rose's point of view, but as she can jump into Lissa's mind and we then get it from Lissa's point of view.
I can say that all together VA is an amazing series, a lot of twists, excitement and action. We have the whole forbidden romance with Dimitri that can drive you crazy, and we have the three-way drama when Adrian comes into the picture.I liked that not all of it happened at the academy. It's nice to change the surrondings so we don't get stuck in the same place.The books had it all. Times where I wanted to cry, laugh, scream at it, throw it out the window, etc. The books have the right amount of excitement mixed with romance.
In the end though I get very annoyed by the whole Rose jumping into Lissa's mind (That would be the screaming). In Last sacrifice there are times where she's supposed to keep a look out and instead she's in Lissa's mind. How about watching the surrondings Rose. You might as well be sleeping then. It's a good way to, in a way, have more than one person's point of view.
It is, as they say, like losing a good friend when you finish a series. Lucky for me, I still have bloodlines to look forward to ;)