Cover crazy is a weekly meme hosted by The Book Worms. Our chance to go crazy and admire all the beautiful covers out there.

Well, since I'm reading Switched by Amanda Hocking I decided to start with that since I absolutely love the cover!


When Wendy Everly was six-years-old, her mother was convinced she was a monster and tried to kill her. It isn't until eleven years later that Wendy finds out her mother might've been telling the truth. With the help of Finn Holmes, Wendy finds herself in a world she never knew existed - and it's one she's not sure if she wants to be a part of.

This book actually has three covers, but I myself own the one above and just love it. (I'll feature the others at the end).
I love the black and white, very simple and then there's the butterflies in orange to give a little color, also if you have the book you can see that there's like little beads to give that extra sparkle to it. Another thing I love is the font of the title. The cover don't tell us that much about what the actual books is about exactly, but that's the beauty of it.
Other covers: 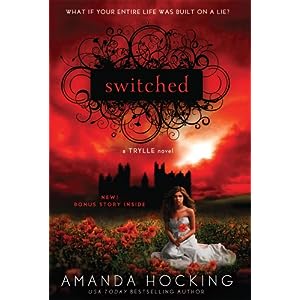 I also really like these two and the second can tell more about what the book is about - the girl among the flowers as I've recently learned always bloom in Trylle and then the big castle like house in the background showing where Wendy is living in Trylle.
So far an amazing book and now I'm gonna go read some more in it :)