So my rating is pretty obvious, of course I loved it! It's The Mortal Instrument and Cassandra Clare! It's Jace and Clary, Malec, Simon and all the other Shadowhunters and downworlders!

I wanna keep this review spoiler free since most have only just gotten their copy of COLS so don't wanna give too much away. There are gonna be some small things, but nothing major will be revealed.

So, we start of, as with most Cassandra Clare books, with  a poem.

No man choosesevil because it is evil.

He only mistakes it for happiness, the good he seeks.
-Mary Wollstonecraft.

Reading this again after having read the book, I can't say anything but that it is perfect! It really fits. There is so many times where Clary looks at Jace while he is bound to Sebastian aka Sathan (Sebastian and Jonathan together) and think to herself if he is happy like he is. He looks happy and acts happy. She has no way of knowing if it's because of the bond with Sebastian doing it, or if this is really him being happy. And who can blame her? We spent the entire book in City of Fallen Angels with a depressed Jace taking his distance from Clary. So for Clary to see him happy for once, not worrying about anything (kind of) is giving her doubts.
We left of in City of Fallen Angels with a huge cliffhanger with Jace and Sebastian being gone. And City of lost souls pretty much picks up where we left of, but in Simon's POV. After experiencing him being shut out of his house and a phone call for Clary saying Jace and Sebastian is gone we fast forward to two weeks later. The search for Sebastian and Jace has been going and with no luck. There is no trace of them. I can say that the first part of the book made me depressed because of Clary being so sad and unhappy. Okay, so I gotta mention when we first get Jace for real and up close- first time is him showing up in Clary's bed, coming to get her to go with him. After some drama going down that I don't want to mention, Clary does come with Jace. She wants to save him and just keep him close, watch him. This means that she is living with Jace and Sebastian. Perfect little family, huh? Not likely. Clary has to go around pretending that she thinks Sebastian is right about everything in the hopes of getting in on his plan. In the meanwhile the others are having trouble finding something that can hurt Sebastian and not Jace. Jordan and Maia are just being cute getting back together after all those years. And also we have a vampire running wild in the city. Someone we've met before and who I will imagine will play a big role in City of heavenly fire.

Jace has a copy of a tale of two cities and in it it says:

With hope at last, William Herondale.


So as you can imagine I was freaking out. It's Will! There is so many references and mentions of Will it was driving me nuts. 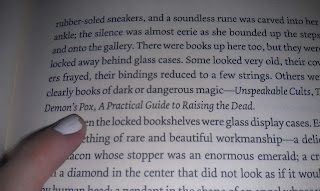 Demon's pox!
Demon's pox! That's all Will! Well, he was right all along and now he got a book about it, too. 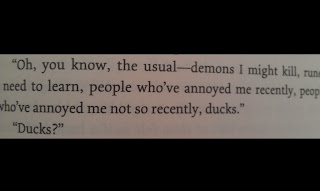 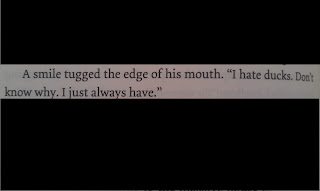 Two mention of ducks! Jace hates Ducks! Just like Will.
Why Will hates ducks:
He felt Jem shake with laughter beside him. What Jem did not know was that Will’s feelings about ducks — and yes, he knew it was ridiculous to have complicated feelings about waterfowl, but he could not help it — were caught up with his memories of his childhood. In Wales, there had been a duck pond in front of the manor. As a child, Will had often gone out to throw bits of stale bread to the ducks. It amused him to watch them quacking and fighting over the remains of his breakfast toast. Or it did, until one of the ducks — a particularly large mallard – upon realizing that Will had no more bread in his pockets, raced at the boy and bit him sharply on the finger.
So that's where Jace must have gotten it from ;D Gotta love the Herondale boys <3

That's all you get. I have to stay spoiler free and not reveal to much.
As said, the books was amazing! I loved it. Always something going on. With changing the character POV , Cassandra are able to leave in small cliffhangers everytime it's changes, which of course will drive one crazy. Now the awful part comes which is waiting for the next book to come *sigh*. At least there Clockwork Prince to look forward to.

So with City of Lost souls done it can now float with the other TMI books.
:D 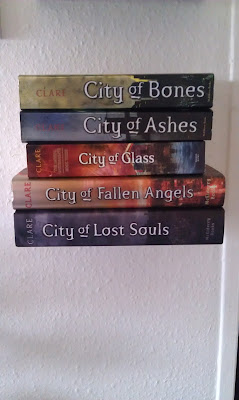 Now I hope everyone will read it soon so I can talk about the end and everything freely :P