Review of Fifty Shades of Grey by E L James.

When literature student Anastasia Steele is drafted to interview the successful young entrepreneur Christian Grey for her campus magazine, she finds him attractive, enigmatic and intimidating. Convinced their meeting went badly, she tries to put Grey out of her mind - until he happens to turn up at the out-of-town hardware store where she works part-time. The unworldly, innocent Ana is shocked to realize she wants this man, and when he warns her to keep her distance it only makes her more desperate to get close to him. Unable to resist Ana’s quiet beauty, wit, and independent spirit, Grey admits he wants her - but on his own terms. Shocked yet thrilled by Grey's singular erotic tastes, Ana hesitates. For all the trappings of success – his multinational businesses, his vast wealth, his loving adoptive family – Grey is a man tormented by demons and consumed by the need to control. When the couple embarks on a passionate, physical and daring affair, Ana learns more about her own dark desires, as well as the Christian Grey hidden away from public scrutiny.Can their relationship transcend physical passion? Will Ana find it in herself to submit to the self-indulgent Master? And if she does, will she still love what she finds?Erotic, amusing, and deeply moving, the Fifty Shades Trilogy is a tale that will obsess you, possess you, and stay with you forever

Okay, so this has been a long time but finally here it is!
My rating:

I loved it! I could not put it down once I got started.
The book was very different from what I would normally read because there's nothing supernatural about it. Unless you call Christian Grey supernatural ;)
This book stayed with me even after I turned the last page. I could not stop going over the things that happened over and over. And of course now I want to read the last two, but I don't have them :( I wanna know what's gonna happen so badly!
Ana is so much fun. Well, her and then her inner goddess. Anyway, Christian is a tough one. There are times when you're not sure whether or not you should love him or not, considering the things he can do and want to do. I will say this, the man does not give up. After he decides he wants Ana he does everything to get her. Not completely his fault cause he does tell her to stay away from him, but of course she doesn't listen and you could say hell breaks loose :P This does that Christian now have to let her in his life and show what turns him on, and that's where the so called red room of pain comes in and in order for Ana and him to enter into any kind of releationship she has to sign a contract - a contract of what's allowed, what's not allowed, safe words, etc.
And being a wealthy man, Christian continues to give her stuff. He buys her a car because he doesn't think the one she's driving is good enough. She gets a laptop and a blackberry so that he can get in touch with her at all times, oh wait.. the laptop was for her to do research about his lifestyle and see if she wanted it and could sign the contract.
Well, in the meantime they continue their relationship because they simply can't stay away from eachother. They even test the red room of pain and Ana does get a spanking for rolling her eyes at him when he told her not to.
Be prepared for a ride when you go through the emotions Ana did. She's so confused whether or not she should be with him or not because when they're together everything can be normal. They seem like a real couple wtih Vanilla sex, as Christian calls it. Which is why Ana can't understand why he wants these things and not a relationship with her. She wants more.
I really hope I will get the last two soon so I can see what happens with these too. Hoping for a happy ending, I can't help it :) 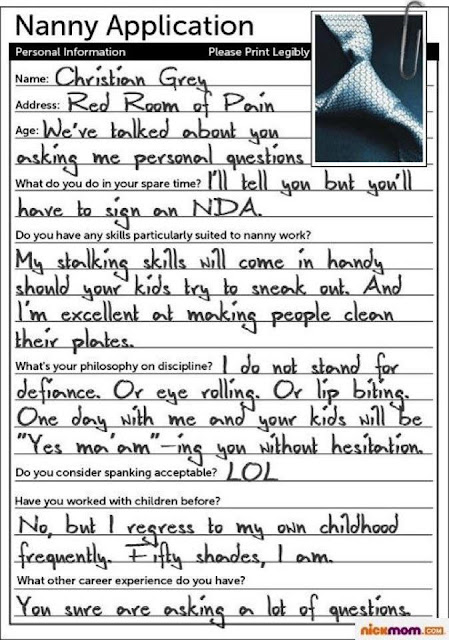 This says a little bit more about how Christian is ;D