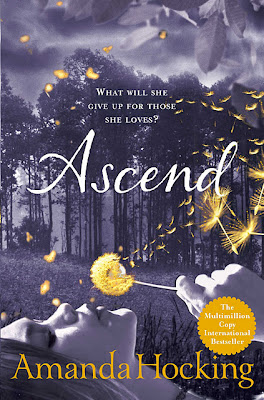 "Amanda Hocking is an indie publishing sensation whose self-published novels have sold millions of copies all over the world. Ascend is the final chapter in her bestselling Trylle trilogy--and you'll never guess how it ends """Wendy Everly is facing an impossible choice. The only way to save the Trylle from their deadliest enemy is by sacrificing herself. If she doesn't surrender to the Vittra, her people will be thrust into a brutal war against an unbeatable foe. But how can Wendy leave all her friends behind...even if it's the only way to save them?The stakes have never been higher, because her kingdom isn't the only thing she stands to lose. After falling for both Finn and Loki, she's about to make the ultimate choice...who to love forever. One guy has finally proven to be the love of her life--and now all their lives might be coming to an end.Everything has been leading to this moment. The future of her entire world rests in her hands--if she's ready to fight for it.

So this review has been a long time coming, but I thought I better get it started before I move cause then there won't be any time. I haven't even gotten around to starting a new book.
*will contain spoilers*

A lot of things change in this last one. So many surprises that I didn't see coming.
In this last one we start out with Wendy being alomst queen. Her wedding with Tove is being planned while they try to figure out how to handle the Vittra.
Wendy's former leading man, Finn is pretty much out of the picture. He does show up at her birthday to give her a present and well, a little more than a kiss before Wendy stop it and "break up" with him.
After that she pretty much continues to act as queen with Tove at her side.
But the kingdom has a visitor. Loki is back. Being his usual charming self. Wendy let's him stay and grows closer to him as she learns more about him and the things he have been through. He's even at her and Tove's wedding where they share a dance.
When the Vittra attacks one of the cities Loki turns out to be helpfull in cleaning up and trying to re-build what have been destroyed. It is also here that Wendy and Loki spend the night together after a incident with Tove and Wendy.
They go home and now have to think of a way to defeat the Vittra king. When Elora dies Wendy becomes Queen and that means that the Vittra are now allowed to attack, but the Trylle beats him to it and attack him instad. Something they don't see coming since theTrylle is not violent like the Vittra.
So I won't reveal all of the end because we have to leave something a surprise :P But there is one thing that I have been gushing over ever since I read it. So Tove and Wendy gets a divorce since he's gay and want to be with someone he loves. So, that means that Wendy has to find a new husband... And that is no other than Loki! :D And not only that, their night together brought with it a little surprise. A baby! So as you can guess it's a happy ending. Perfect fairy tale :P
And as you can tell, things have changed. Wendy has grown with her responsibility as queen, and after two books of it being Finn Finn Finn it's now Loki Loki Loki, and the trylle won't have to worry about the Vittra again.

Me going on about danish stuff in the book: (xD)
One of the things that was fun for me in reading this book is that I saw a lot of words that reminded me of Danish. The danish writer Hans Christian Andersen was even mentioned once in the series.
Anyways seeing these words made me of course say them in danish.
Just the name Trylle is supposed to be pronounced 'Trill' - which I haven't said once reading it.
There's also names, like Tove- that's actually a girls name here in Denmark, but yeah xD
The word Mänsklig- meaning human - is very close to the danish word for human which is Menneskelig.
The last thing is the name of a tribe, the tribe Kanin... I have no idea how to say this in english because Kanin is the danish word for bunny.
And now I'm done :P