Mia Price is a lightning addict. She’s survived countless strikes, but her craving to connect to the energy in storms endangers her life and the lives of those around her.Los Angeles, where lightning rarely strikes, is one of the few places Mia feels safe from her addiction. But when an earthquake devastates the city, her haven is transformed into a minefield of chaos and danger. The beaches become massive tent cities. Downtown is a crumbling wasteland, where a traveling party moves to a different empty building each night, the revelers drawn to the destruction by a force they cannot deny. Two warring cults rise to power, and both see Mia as the key to their opposing doomsday prophecies. They believe she has a connection to the freak electrical storm that caused the quake, and to the far more devastating storm that is yet to come.Mia wants to trust the enigmatic and alluring Jeremy when he promises to protect her, but she fears he isn’t who he claims to be. In the end, the passion and power that brought them together could be their downfall. When the final disaster strikes, Mia must risk unleashing the full horror of her strength to save the people she loves, or lose everything.

I won this book in a giveaway in a big swag pack: 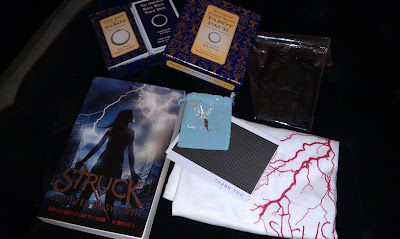 Look at it! how awesome is that! t-shirt, tarot cards, gloves, bookmark, tattoo, necklace with a lighting :D

I must say I was surprised at how good this book turned out to be with the plot and the twists and turns going on. It is like Dystobian mixed with some supernatural, love it!
Mia is the main character and she's addicted to lighting, yeah a bit of 'huh' moment there, but it works and just makes it all more interesting.
The book takes place in LA, right in the middle of the chaos from the earthquake. Mia, her brother and mother tries to live a normal life despite this, but things have changed and in the middle of all this mess you have the seekers and the people following Prophet. Both of this can be defined as the "the bad guys" at first, because you're not really sure what to trust, but however it is obvious that Mia does not care for Prophet and his ways.
Prophet is "the light" while the seekers are "dark" - very different.
The seekers wants to stop the world from ending while Prophet and his followers wants to make sure that they make it into heaven.
Moving on to the love interest of the story, Jeremy. The connection between them does not happen right away, Mia is used to keeping a distance with people and with him it's no different, especially because he seems to know more about her than she does about him.

Overall great book! it's exciting, has some awesome twists and turns along the way to keep you interested.