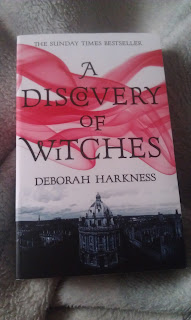 A Discovery of Witches by Deborah Harkness
Goodreads

"A wonderfully imaginative grown-up fantasy with all the magic of "Harry Potter" and "Twilight.""-"People"In a sparkling debut, "A Discovery of Witches" became the "it" book of early 2011, bringing Deborah Harkness into the spotlight and galvanizing fans around the world. In this tale of passion and obsession, Diana Bishop, a young scholar and the descendant of witches, discovers a long-lost and enchanted alchemical manuscript deep in Oxford's Bodleian Library. Its reappearance summons a fantastical underworld, which she navigates with her leading man, vampire geneticist Matthew Clairmont. Harkness has created a universe to rival those of Anne Rice, Diana Gabaldon, and Elizabeth Kostova, and she adds a scholar's depth to this riveting story of magic and suspense

I got this as a early birthday present from my friend! :D We're currently reading it as a buddy-read.
And then I borrowed these two from her: 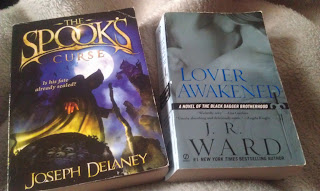