Review: Caught in the Glow 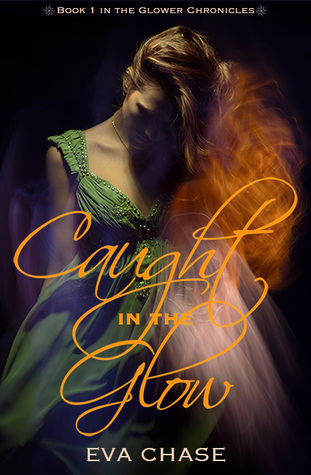 Caught in the Glow by Eva Chase

When she was a child, Avery Harmen watched her father die at the hands of a Glower–a breed of demon that feeds on dreams of fame and glory. Now she secretly protects the rising stars of Los Angeles from the demons that prey on them, determined to make sure her clients never suffer the same fate.Then Avery finds herself assigned to Colin Ryder, a young indie rocker who just landed a major label deal. Colin is cocky, rebellious, a brilliant musician, and already in the Glowers' sights. He's also far too hot for Avery to ignore the chemistry between them–especially when she gets to know the tender side behind his celebrity facade. Though Avery knows she's falling too fast, she's willing to risk heartbreak if fanning the flames of attraction distracts Colin from his Glower-tempting antics. But Colin is keeping a secret of his own, one so big it will put both her heart and his soul on the line.The first book in The Glower Chronicles, a steamy New Adult paranormal series.Each book in The Glower Chronicles contains a stand-alone romance, but it is recommended that you read them in order to best appreciate the ongoing subplots.

Caught in the Glow was one nice surprise!
It's like a New Adult book, but mixed with just the right amount of paranormal.

Avery Harmens' father died when she was just a child, he died at the hands of Glower- demons that feed on fame and glory. Now she wants to make sure that what happened to her father won't happen to others.
She gets assigned to Colin Ryder, who is already in the Glower's sights. She has to make sure that he won't lose his major record deal while keeping him away from the Glowers.
As her and Colin get closer it's hard to ignore the attraction between them, Avery is more determined than ever to keep the Glowers away from him and keep him safe, no matter what.
But Colin is hiding a secret that changes everything.

This book has so many things going for it that made me beyond excited. First who doesn't love a good paranormal book-check. Mix in some new adult you get some steamy scenes and then you add one hot cocky rockstar and kickass heroine. Overall you get one amazing book!
The book is in Avery's POV which I loved, really fit that it was just her because of the secret Colin was hiding, not knowing his thoughts added more excitement to what his deal was sometimes. I love single POV's where you can just dive into the book and kind of become that person, seeing what they're seeing and feeling. Made it easy enough since Avery was pretty awesome, she's an amazing drummer and she has some tricks to fight off the Glower's, she's tough and overall just awesome really.
On the surface Colin puts on that cocky rocker who can do whatever he wants act, but there's more to him, takes a while for it to come out, but it's great slowly getting to know him and why he is the way he is. Althought I wasn't really complaining when he was the cocky rocker, that was pretty fun as well.
I also loved the chemistry between Colin and Avery, it's the kind where you just sit and wait for something to happen cause you know it can't be avoided, no way can those two stay away from eachother.

To sum up, Caught in the Glow was an amazing book, well written with one awesome story and unique in the best way possible.
I, for one, can't wait to read the next one. Eva Chase lives in Canada with her family. She loves stories both swoony and supernatural, and strong women and the men who appreciate them.