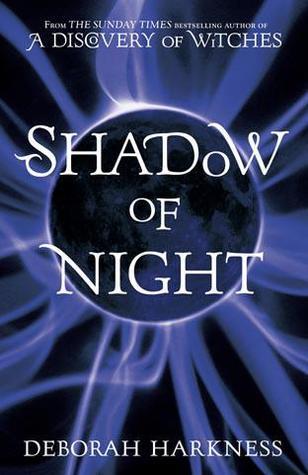 Shadow of Night by Deborah Harkness

IT BEGAN WITH A DISCOVERY OF WITCHES.Historian Diana Bishop, descended from a line of powerful witches, and long-lived vampire Matthew Clairmont have broken the laws dividing creatures. When Diana discovered a significant alchemical manuscript in the Bodleian Library,she sparked a struggle in which she became bound to Matthew. Now the fragile coexistence of witches, daemons, vampires and humans is dangerously threatened.Seeking safety, Diana and Matthew travel back in time to London, 1590. But they soon realise that the past may not provide a haven. Reclaiming his former identity as poet and spy for Queen Elizabeth, the vampire falls back in with a group of radicals known as the School of Night. Many are unruly daemons, the creative minds of the age, including playwright Christopher Marlowe and mathematician Thomas Harriot.Together Matthew and Diana scour Tudor London for the elusive manuscript Ashmole 782, and search for the witch who will teach Diana how to control her remarkable powers...

So it occured to me that I still haven't written a review for Shadow of Night, which makes me sad cause I loved this book so much. It'll be short, but I wanted to say a few words about this amazing book and amazing author for that matter.
Deborah Harkness really amazed me with A Discovery of Witches and I completely fell in love with the world she created. What luckily didn't happen with the second book was a decline of quality. Shadow of Night is just as amazing as the first, but in its own way. I get completely lost in the world and the characters.

Shaow of Night takes us through time and together with Diana and Matthew we get to experience London in 1590 while they seek safety and search for Ashmole 782. While Diana adjust to life in 1590 and search for someone to teach her about her powers, Matthew becomes his former self, a poet and spy for Queen Elizabeth and falls back in with the group the School of Night.

I am truly amazed at how Harkness took us back in time and made you feel as if you were in London in 1590. While the search for Ashmole 782 is still going there's so much more going on with them being thrown into the middle of everything that's already happening. Diana is also learning her new powers which was very interesting and I loved to see her grow in this book.
So as I said. Just as good as the first and I am still in love with these books. My life has been a series of left turns that nevertheless took me in the right direction (though it didn't always seem so at the time). I went to college to be a theater major and ended up studying the Renaissance. I went to grad school to become a college administrator and loved to teach so much I became a college professor instead. I thought I wanted to be a Tudor-Stuart historian, and found myself a historian of science. I started blogging because a friend needed help on a project in 2006 and am still blogging about wine today. I started writing a novel in the fall of 2008, and it became a New York Times Bestseller in February 2011: A DISCOVERY OF WITCHES. The second volume in the All Souls Trilogy, SHADOW OF NIGHT, came out in July 2012 and debuted at #1 on the NEW YORK TIMES Bestseller's List. What's next? The final volume of the trilogy, of course. We don't have a release date yet, but when we do it will be posted here.