Stella Spencer has one enemy—her secrets.

The world’s obsession with the Bright Young Things is real. Every lavish party thrown by the most exclusive group in New York is a spectacle, stalked not only by the media, but by the police commissioner, who’s declared war. He’s out to ruin everyone’s good time, starting with uncovering the mysterious benefactor leading the group, thus answering the question on everyone’s lips.

Who is Cecelia Beaton?

And no one knows it’s Stella.

If society finds out the truth, her plans will unravel. And with one smoldering look from a stranger, her carefully ordered world catches fire.

Levi Hunt has one plan—get the story.

His future at Vagabond magazine depends on his ability to do the one thing no one can: infiltrate the Bright Young Things. If he can find out who Cecelia Beaton is, he’ll earn enough notoriety to permanently secure his career.

His dreams are at his fingertips, so long as he doesn’t blow his cover. But one night with the brightest, most brilliant young thing of all, and he knows he’ll have to make a choice.

The job he loves or the woman of his dreams.

Secrets and lies. Love and laughter. And two people with something to hide and everything to gain.

Welcome to the party.

First of all this book is perfection to me. I wish I could go to these parties! Starting off with the Great Gastby theme spoke to my soul and had me hooked right away.

Levi manages to tag along to one of the lavish Bright Young Things parties where his only plan is to get the story to move along in his career. However, when he meets Stella everything changes. Fresh out of a breakup Stella needs a distraction and Levi seems like the perfect candidate. It's all fun and bikerides from there.

Stella and Levi are definitly bringing the heat. I love their chemistry and easy way of being together and just be.
We also can't forget the friends that surrond them that makes it all that much more fun and Stella had some fun friends that you wish were yours.
Great story. Fun characters. Love with just enough heat in there.
It has it all for me.
I don't always like insta love and although you could say Stella and Levi are more insta-lust, but however it worked for them whether it was love or lust. Maybe because it was just about them being drawn to eachother at first and then it all evolved from there.
And just when you thought it was gonna unravel, you're fooled and therefore have to keep reading.
Loved every part of it.
Please join the party! Staci has been a lot of things up to this point in her life -- a graphic designer, an entrepreneur, a seamstress, a clothing and handbag designer, a waitress. Can't forget that. She's also been a mom, with three little girls who are sure to grow up to break a number of hearts. She's been a wife, though she's certainly not the cleanest, or the best cook. She's also super, duper fun at a party, especially if she's been drinking whiskey. When she's not writing, she's reading, sleeping, gaming, or designing graphics. 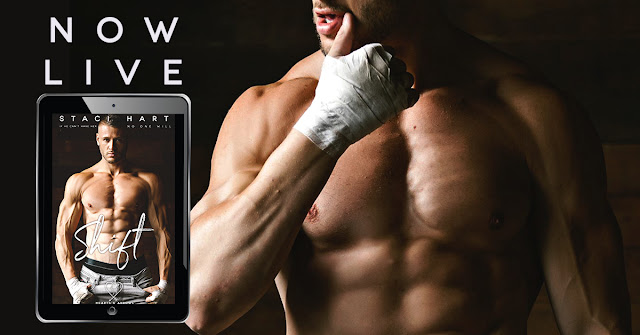 Bestselling author Staci Hart brings you the second installment of an addictive romantic mythology series where love is the ultimate game, and Aphrodite always wins. Shift by Staci Hart Publishing Date:  August 24th, 2017 Genre: Contemporary Romance Cover Designer: QuirkyBird Designs Photographer: Lauren Watson-Perry Synopsis: Even the gods cannot betray the will of the stars. It’s been a hundred years since she’s warmed my bed, a hundred years spent waiting for her. Now we’ll compete again in a game that matters little to me. But my prize is far greater than a token to be paid for a favor — I want her. And for the first time in a very long time, I have the chance to keep her. Because now the ground has shifted, tilted in my favor, and with her footing unsteady, she will fall. I will catch her. This time, I won’t let go. My rating:  *3.5 STARS*  The gods are at it again. This time Aphr
Read more

Everyone hates part of their job, and I hate Luke Bennet. Coming Up Roses, an all-new must read enemies to lovers romantic comedy from Staci Hart is available now! Everyone hates parts of their job. Maybe it’s the paperwork. Maybe it’s the day-to-day grind. Maybe it’s that client who never knows what they want, or the guy who always cooks fish in the microwave. But not me. I love every corner of the Longbourne Flower Shop, every flower, every petal, every stem. I love the greenhouse, and I love Mrs. Bennet, my boss. I love creating, and I love being a florist. I don’t hate anything at all. Except for Luke Bennet. The Bennet brothers have come home to help their mom save the flower shop, and Luke is at the helm. His smile tells a tale of lust, loose and easy. He moves with the grace of a predator, feral and wild. A thing unbridled, without rules or constraint. When he comes home to save Longbourne, I almost can’t be mad at him. Almost. He doesn’t rememb
Read more