Review: "The Boy Who Sneaks in My Bedroom Window" 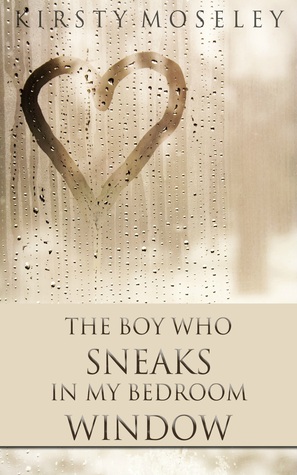 The Boy Who Sneaks in My Bedroom Window by Kirsty Moseley

Amber Walker and her older brother, Jake, have an abusive father. One night her brother's best friend, Liam, sees her crying and climbs through her bedroom window to comfort her. That one action sparks a love/hate relationship that spans over the next eight years. Liam is now a confident, flirty player who has never had a girlfriend before. Amber is still emotionally scarred from the abuse she suffered at the hands of her father. Together they make an unlikely pair. Their relationship has always been a rocky one, but what happens when Amber starts to view her brother's best friend a little differently? And how will her brother, who has always been a little overprotective, react when he finds out that the pair are growing closer? Find out in The Boy Who Sneaks In My Bedroom Window.

This book was... so unbelievalblely cute and beautiful!
I saw it around on Goodreads and facebook with people having read it and saying how good it was and I thought it sounded really good so I simply had to have it and read it as well. Really happy I did because, wow.

The story is centerred around Amber, her older brother Jake and the boy who sneaks in her bedroom window aka the boy next door and also Jake's best friend, Liam.
When we start Amber is around 8 years old and Jake and Liam are 10. We get to see how Amber and Jake's homelife are and the things that these kids have to deal with. They're both abused by their father, including their mother, emotionally and physically. Amber however is also being sexually abused by him, without anyone knowing about it except her and the father. With the way the book start it shows how an ordinary day is for them and also get to see how the whole Liam sneaking into her room gets started and so it continues through the next 8 years- he's protecting her from nightmares and just helping her get by by holding her during the night. It's such a sweet thing and I really liked the concept of it, I thought it was one of the cutest things ever. Outside of the bedroom, Liam is... well he's not exactly a jerk, but it's different between them. When it's night he's sweet and gentle, but out of her bedroom he teases her a lot (One thing that turns out to be so cute is him eating her cereal, but there's a twist to that that's simply adorable), but every day she would come out of her room and Liam would be there eating her cereal and so the daily routine with him teasing her and provocking her to get an reaction out of her began. Despite that he's still very protective towards her even during the day.
But their relationship, it's beautiful! Especially after the whole jerk Liam gets removed or daytime Liam.
Another thing that's amazing were the way he was able to calm her down.
After what her father put her through it's no wonder that she has issues, and might I add she does extremely well despite that, and Liam helps her through it. He can calm her down like no one else can by his touch. I loved the way he were able to do it, like no one else.
But, their relationship doesn't stay that way though. A kiss changes everything and we find out more about how Liam really feels about Amber throughout all these years, which is also one of the sweetest things I have ever read about.
I think Amber and Liam has been one of my favorite couples ever. Liam is the sweetest guy and him and Amber are amazing together. They help eachother overcome the obstacles that are thrown at them and don't doubt eachother. Amber is so strong, it's unbelieveable. She might take time to realize how deep her feelings for Liam run and also to overcome what she's been through, but she manages. They are a couple to root for and I couldn't be more happy that even though it wasn't easy or painless they got their happy ending.
Amber and her brother's relationship is also important in the book. From the start we see how he protects Amber from their father, he sheltered her and made sure that she was not the one to get harmed, but him instead. After all that he would still comfort her afterwards. I also get why as they grow up be becomes more over-protective towards her, a guy couldn't come near her or anything, but eventually he has to let it go. Liam and Amber keep their relationship a secret, Jake doesn't even know that Liam sleeps in her bed every night and has for the past 8 years. Of course they kept it secret when it also evolved due to how Jake could react to it. He actually takes it well despite his action in the past, but he sees the bond and the way Liam can calm her down, something that he couldn't even do and that made him see that Liam wasn't bad for her.
While there's abuse and it play a big part of all their lives it's not the focus in the story. It shows the trauma and how it affects people, it's about overcoming it and moving on. It's more about the love, whether it's love between a brother or sister or love in a relationship.
The writing style of the book was also good, simple and easy to follow the narrative.

Overall a beautiful book about love and overcoming your fears and moving on from the past and a gorgeous story about love.
It's really one of the sweetes books I've ever read.

My name is Kirsty. I was born in Hertfordshire, England. In 2000 I moved to Norfolk, it was there that I met my husband, Lee. Now, what can I say about Lee, apart from everyone should have one? He's my biggest supporter, and I wouldn't be where I am today without his encouragement and endless support. He is my inspiration behind most of my male leads, I always try to bring a little of him in somewhere, be it his kindness, selflessness, or just his ability to make me feel treasured.
In 2005, I was gifted with the birth of my son. He is, and always will be, the best thing I have ever done in my life. As you can probably tell,  I'm a very proud mummy.


I have always been interested in writing, but after the birth of my son I accidentally came across an amateur writing site. After a couple of months of just reading on there, I finally plucked up the courage and posted one of my stories. I was shocked and overwhelmed by the support of readers on there and they gave me the confidence to get where I am today.

In April 2012, I self-published my first novel ‘The Boy Who Sneaks in my Bedroom Window’. And in October 2012 I took the plunge again, publishing my second novel, 'Always You.'

Lastly, if I had to sum myself up in one word, it would probably be ‘daydreamer’ – but unlike most of my school teachers, I don’t necessarily view that as a bad thing. After all, I read somewhere once that books are like waking dreams….

review the boy who sneaks in my bedroom window