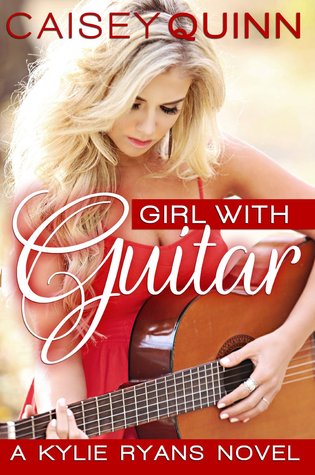 Girl with Guitar by Casey Quinn

After Kylie’s dad dies in a freak accident, he leaves her with nothing other than her crazy stepmother, Darla, and the ability to play guitar. When Darla kicks Kylie out and she loses her job all in the same day, she hops a bus to Nashville determined to make her late father’s dreams come true. Waitressing and saving her pennies to record a demo, her big break comes when she’s asked to join a tour going down the tubes with once platinum album-selling country music superstar Trace Corbin. But touring with Trace is hardly a dream come true since he’s pretty much drinking his career down the drain. If Kylie can’t pull Trace out of his rut, he’ll pull her and her dreams down with him.

I've been meaning to read this for a while after hearing so good things about it and since I was on a roll I thought why not read this as well. And I FINALLY did. Been having the book for a while now and after reading it I just wanna curse at myself for waiting so long, too long, to read it. Took me less than 24 hours to finish it, I just couldn't put it down.

Girl with Guitar is about 18 year old Kylie Ryans who's lost her father in a accident leaving her with nothing but her stepmother Darla as the only "family" she has left, but after she loses her job and are kicked out of the house all in the same day she makes the decision to hop on a bus and go to Nashville to follow her dream no matter what it takes. She wants to become the next big thing in country music so armed with the few cash she has left and her guitar she's determined to make it happen in Nashville. She gets work at a bar, but one night at open mic everything is changes and she's asked to join country music superstar Trace Corbin on his tour. However after being on tour with him for a short period of time she realizes that her dream won't come as easily. Trace spends most of his time drinking and Kylie has to make sure he keeps his career if she even wants one for herself.

Okay so no wonder I finished this in less than 24 hours it was just that good! I refused to stop reading until I knew every single thing that was gonna happen and before I knew it, it was done.
As a main character I loved Kylie. It takes a lot of courage to just leave everything you know behind and go to a completely different city to follow your dreams the way she did. She risked everything to follow her dream and I really admire her for that. She's ready for fight for what she wants. She feels before she acts as they say and she's not afraid to tell Trace off. She won't take anything for him and let's him know exactly how she feels. Overall she's just a really nice girl actually.
Then there's Trace. Wow. He might have his issues and all that, but I loved him anyways. The flirting and panty dropping smile and then there's his shirtless cooking (yum!) and mud fights and just his whole being.

“Trace Corbin should come with a warning label: highly addictive.”

He needs to work on some things obviously, but you just can't not love him. It's clear how much he cares for the people he loves and as soon as his family enter you can tell how much he cares about them and after all the things happening earlier you then get a glimpse of the guy underneath.
Then there's Kylie and Trace together and whoa. There's a hell of a lot of sexual tension between those two despite them at first barely liking eachother, but I guess that's what makes it even better is them getting to know eachother and realize hey there's something there. What really made it better was them on a bus together, that little space and all that tension, just made it better. Trace is a big part of why they don't get along, because of the way he acts, but turns out all he needed was a girl like Kylie to put him in his place.
Other than Kylie and Trace there's other great characters like Pauly and especially Kylie's friend Lulu I found to be hilarious. She said the funniest things and were a really good friend to Kylie.
I quickly connected with Kylie and her story right from the beginning and actually wasn't long before the first tear ezcaped. This book had me going through all the emotions- crying, laughing, anger etc. I was completely wrapped up in the life of these characters.
Overall an amazing book that had amazing writing to capture right from the start. Another amazing thing were the fact that there were actual lyrics in the books, original lyrics, it was perfect because it fit completely with the characters and what they went through as they wrote or sang them in the book.
If you love a breathtaking romance then this book is a fantastic choice. I loved every minute of it.

If she could get into the one here at The Texas Player's Club, she'd drag Trace Corbin out by his ass, stick her arm up it, and do his entire set ventriloquist style if she had to.

"Yes, it does. Which is why you should run back to your room as fast as those pretty little legs can carry you. And lock the goddamned door."

Trace flinched like he's been popped with grease. Well, that was what he got for cooking shirtless.

“Damn, the boy could sing. And Lord, those jeans. Oh no. She was becoming a Trace Corbin fangirl. She could feel it happening and she was powerless to stop it.”

Caisey Quinn lives in Birmingham, Alabama with her husband, daughter, and other assorted animals. She is the bestselling author of the Kylie Ryans series as well as several New Adult and Contemporary Romance novels featuring southern girls finding love in unexpected places. You can find her online at: