In this dazzling and long-awaited conclusion to the acclaimed Mortal Instruments series, Clary and her friends fight the greatest evil they have ever faced: Clary's own brother.Sebastian Morgenstern is on the move, systematically turning Shadowhunter against Shadowhunter. Bearing the Infernal Cup, he transforms Shadowhunters into creatures out of nightmare, tearing apart families and lovers as the ranks of his Endarkened army swell.The embattled Shadowhunters withdraw to Idris - but not even the famed demon towers of Alicante can keep Sebastian at bay. And with the Nephilim trapped in Idris, who will guard the world against demons?When one of the greatest betrayals the Nephilim have ever known is revealed, Clary, Jace, Isabelle, Simon, and Alec must flee - even if their journey takes them deep into the demon realms, where no Shadowhunter has set foot before, and from which no human being has ever returned...Love will be sacrificed and lives lost in the terrible battle for the fate of the word in the thrilling final installment of the classic urban fantasy series The Mortal Instruments!

Another goodbye...Why do books have to end. Especially this series, one that's been with me for so long, but here we are in 2014 and it's all over and done. All I can do is say goodbye.
I still remember borrowing the first book (Danish even!) from my friend Sara so I had something to do on the plane to Barcelona. Even translated to danish I loved the book so much! As soon as I could I ordered the other two, but in english, and also the first one in english. Of course couldn't wait to see what happened so read the 2nd then 3rd and 1st again afterwards.
September 2010 was when I started City of Bones and now 4 years later it ends with book six. What a journey it's been! This story and these characters will forever stay with me and it won't be goodbye for good, there's re-reads and hopefully a glimpse of Clary, Jace and all the others in The Dark Artifices.

So let's get to the actual book. Let me first get this little negative thing out of my system, I love one person POV, I like when there's two and I like more, too if it makes sense. Most of the time in City of Heavenly Fire it made sense, but then came the thing that I hate... the "bad" guys POV. I just can't take that! I just do not wanna know what the bad guy is up to, let me be surprised. Luckily it wasn't long or completely stupid, but just sigh. Anyways.
Other than that, despite being mostly scared for everyone through the entire book it was epic. Definitely better end for everyone than what I had put in my own head.
A good way to end the series.
As always the characters were amazing. Jace, Clary, Alec, Izzy, Simon, Magnus... and I could go on. Clary has really become a true shadowhunter, Jace is his amazing funny snarky self. Then there's Alec and Izzy who are just the best siblings ever and both have come such a long way. So has Simon, all that he's been through and he still hangs on to the boy he was with his D&D plans and what not.
Magnus I still love to bits and pieces! Always will! Him and Alec are adorable.

So a very emotional, but amazing book that will leave you at the edge of your seat.

Also the crying wasn't so bad like it was with Clockwork princess where it was full on sobbing. Of course a few tears escaped around the end just because.. this was it. The end.
Thanks Cassandra Clare for an amazing series! 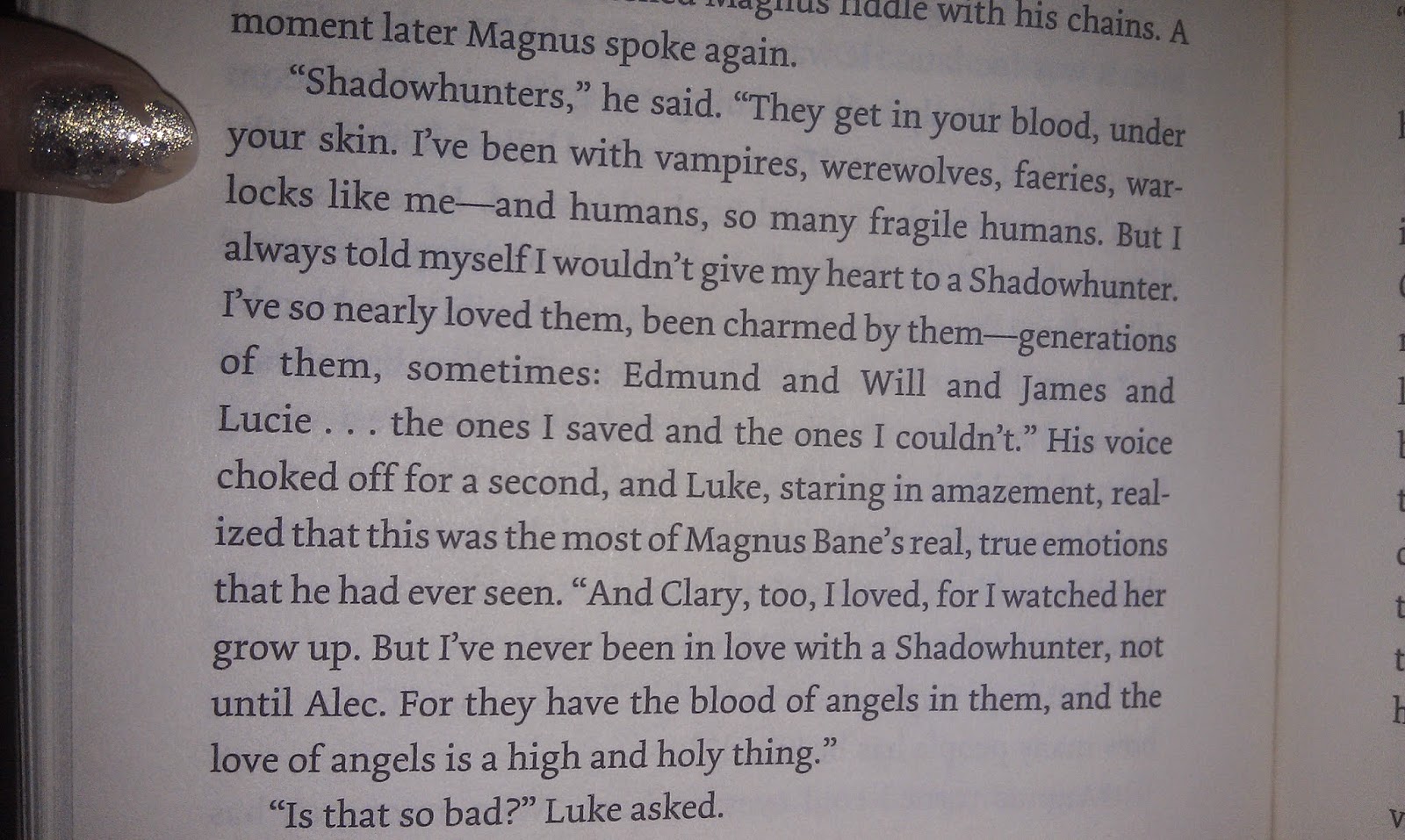 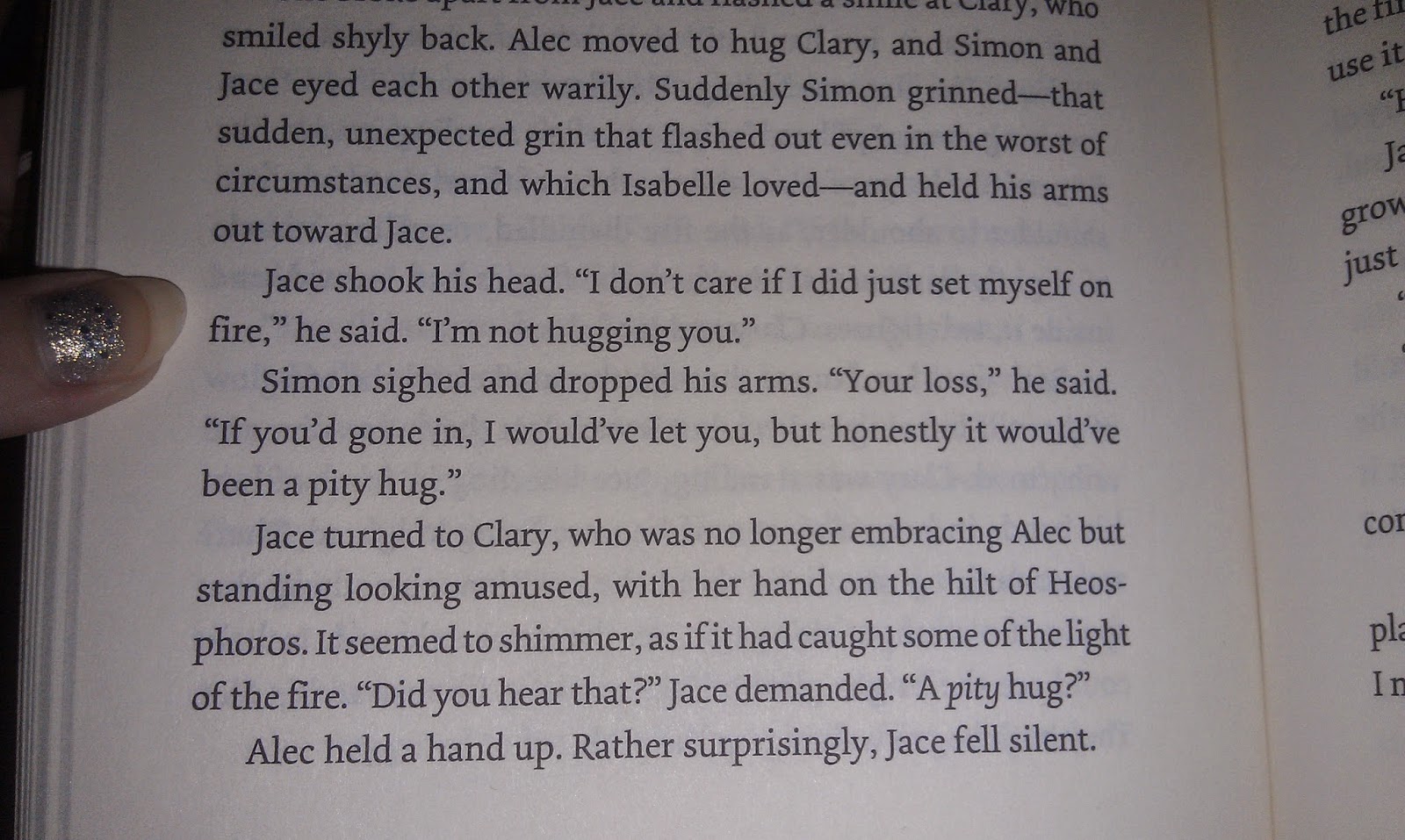 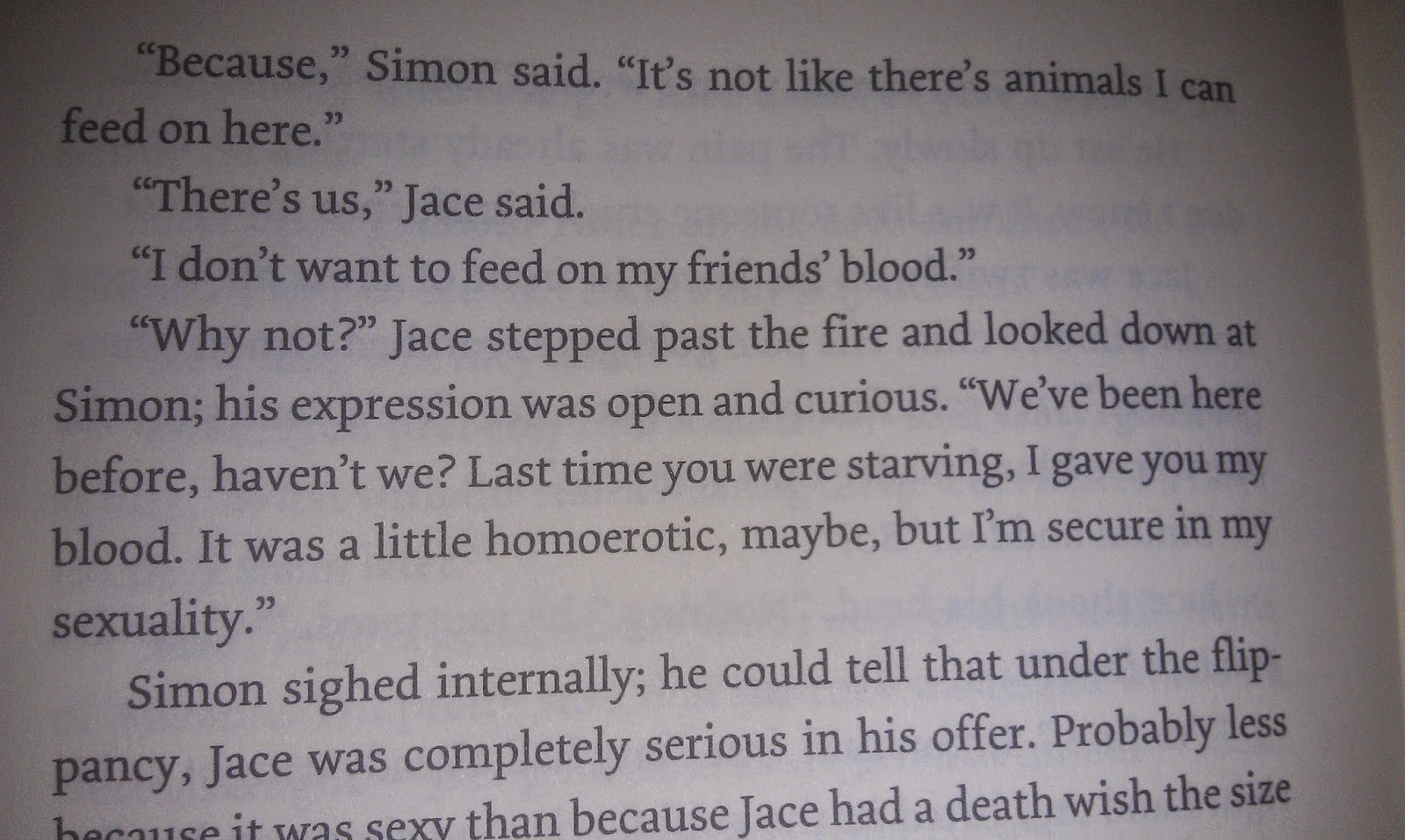 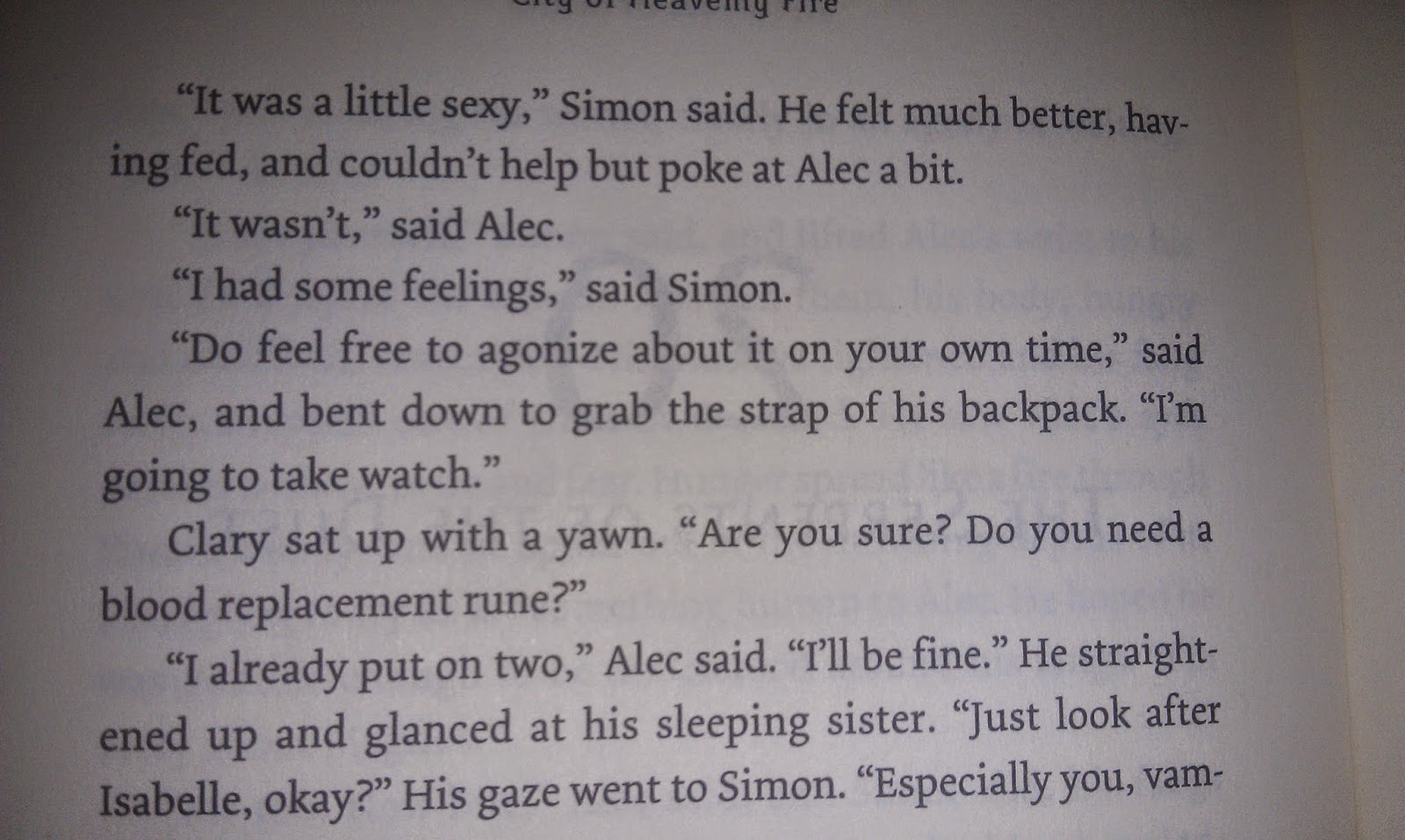 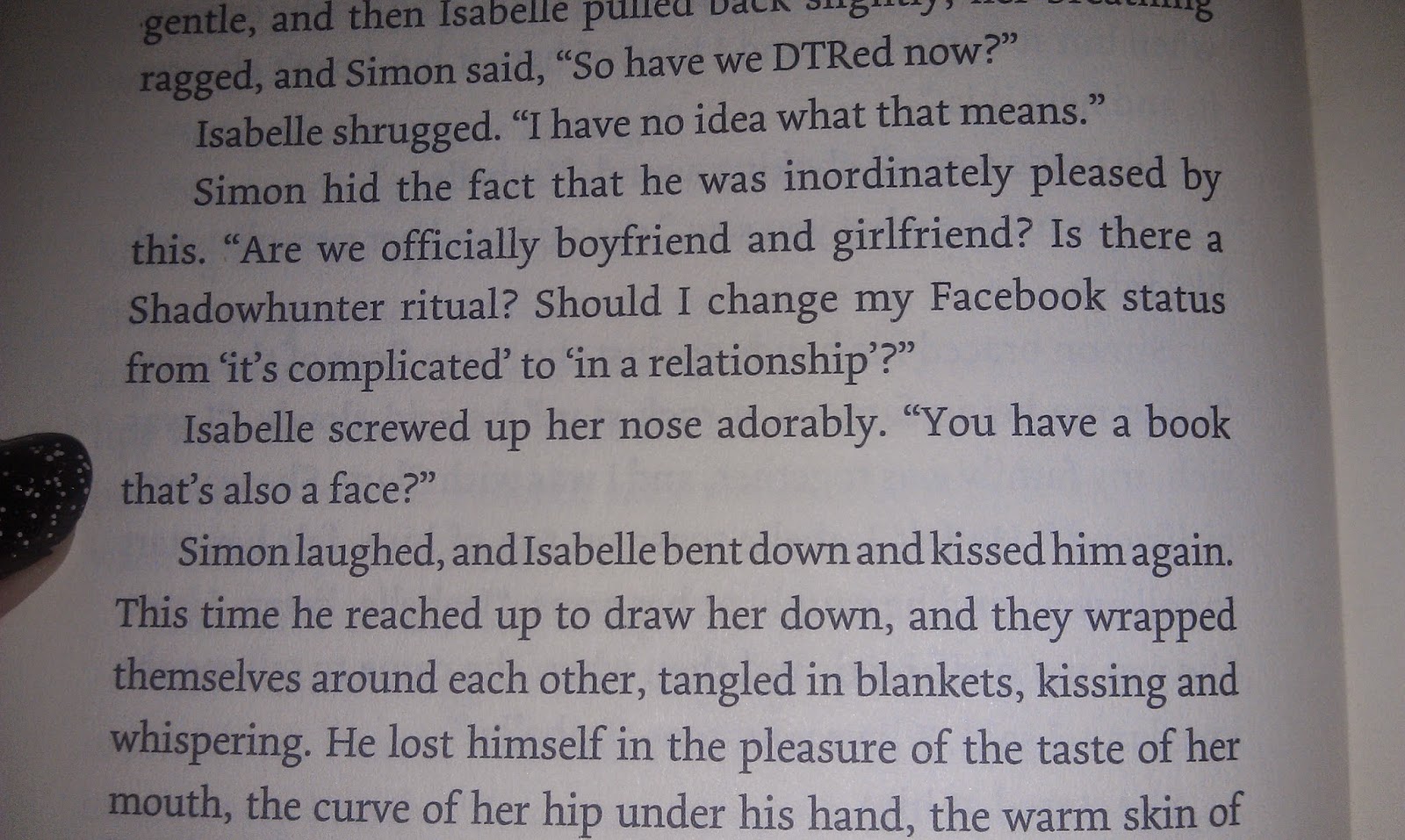 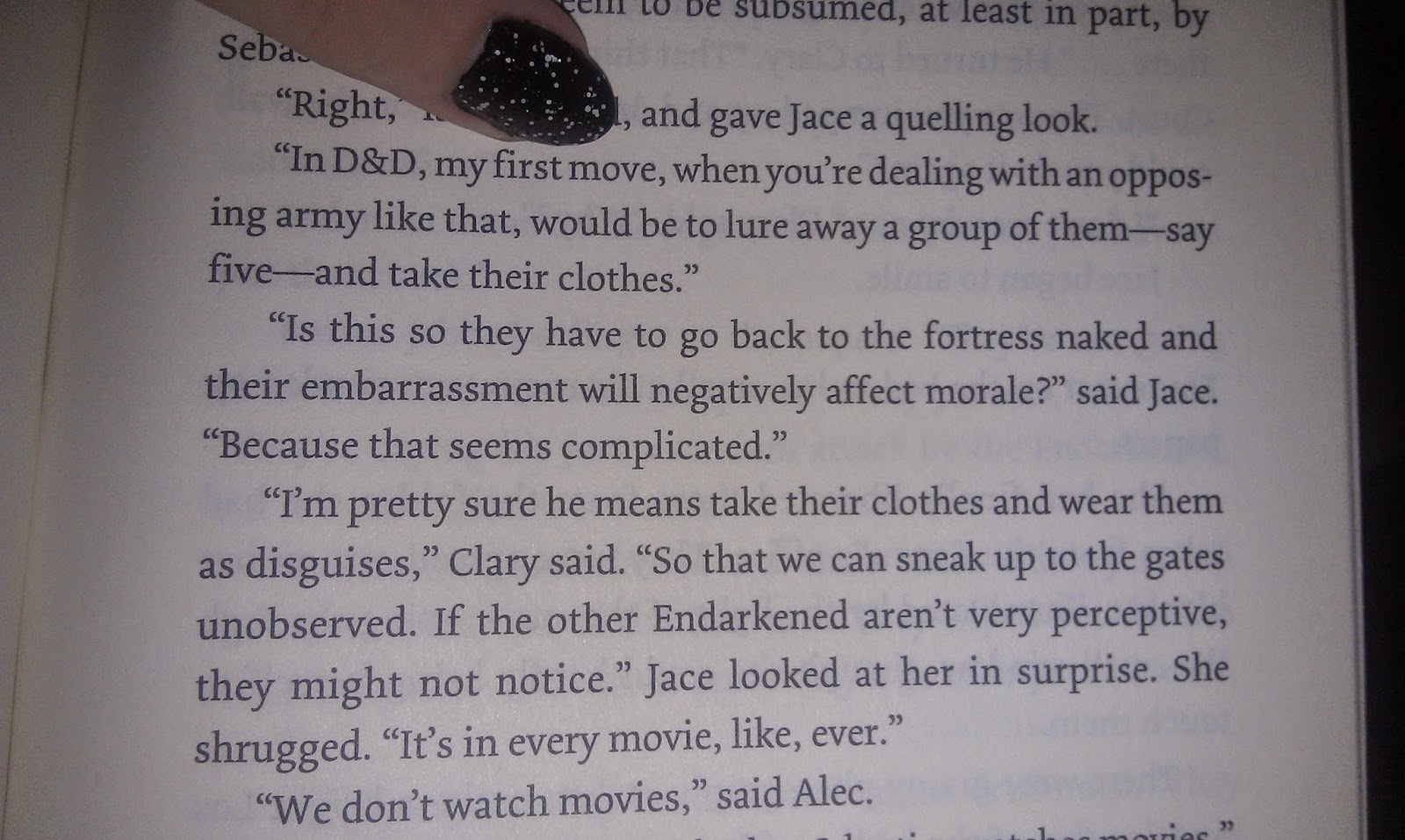 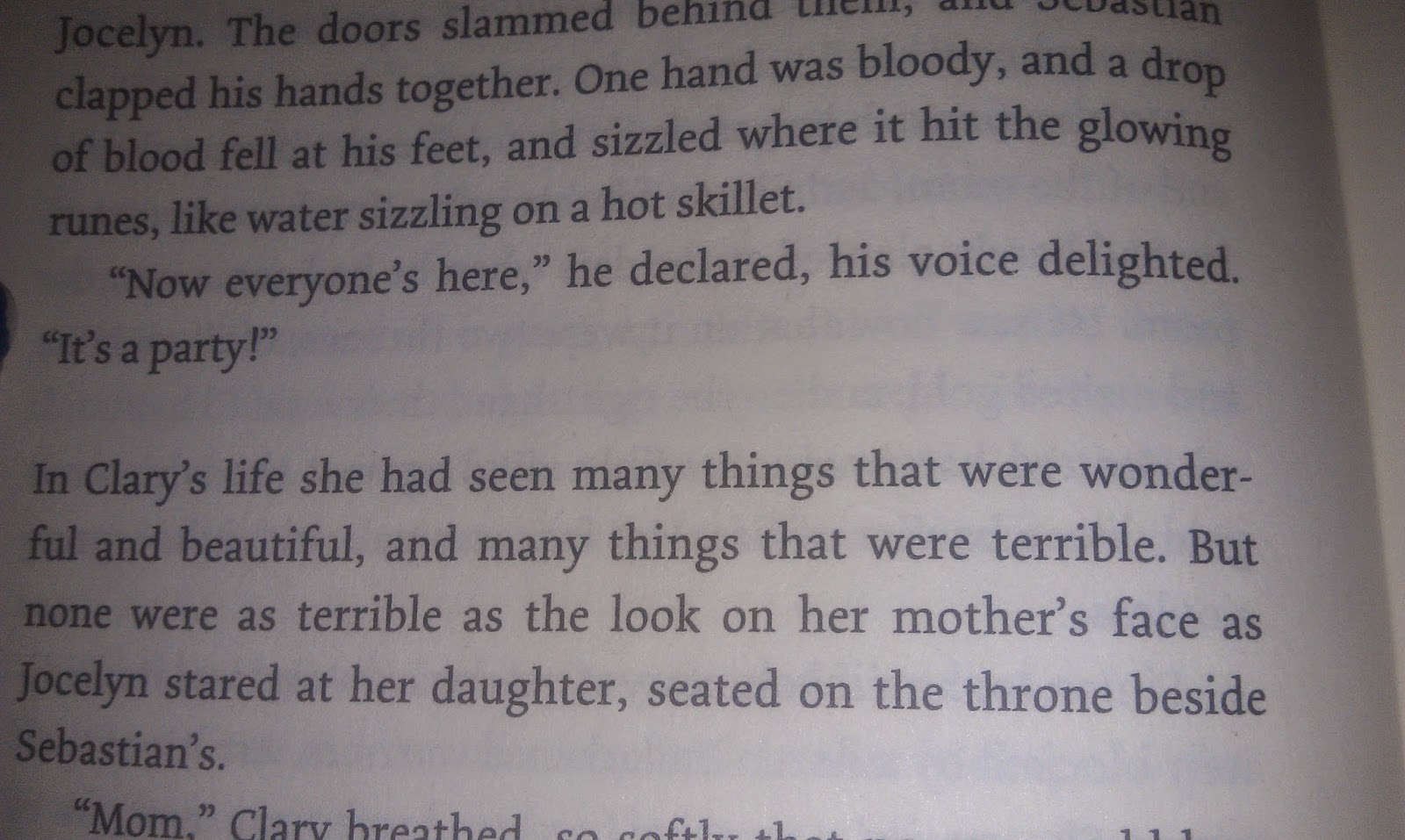 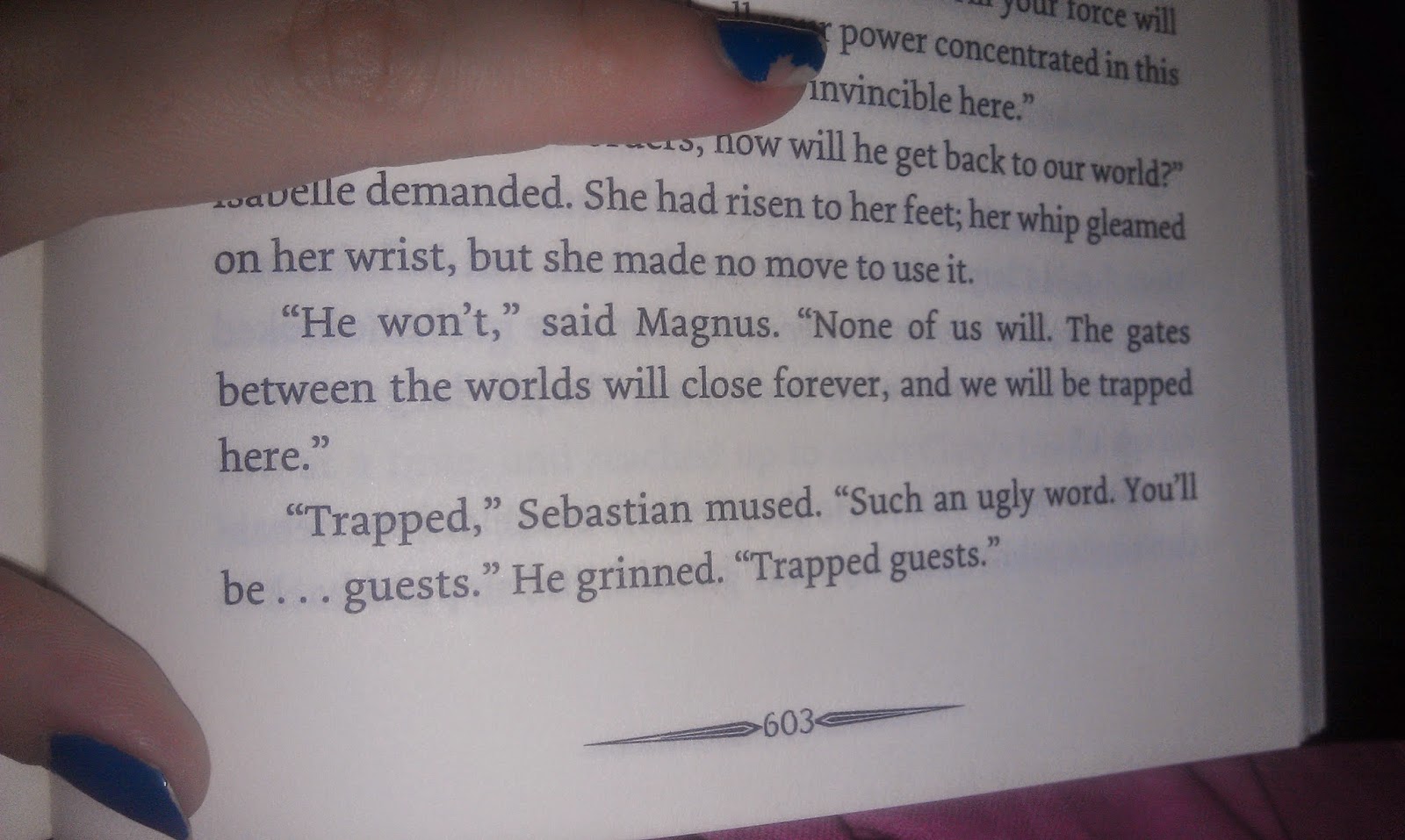 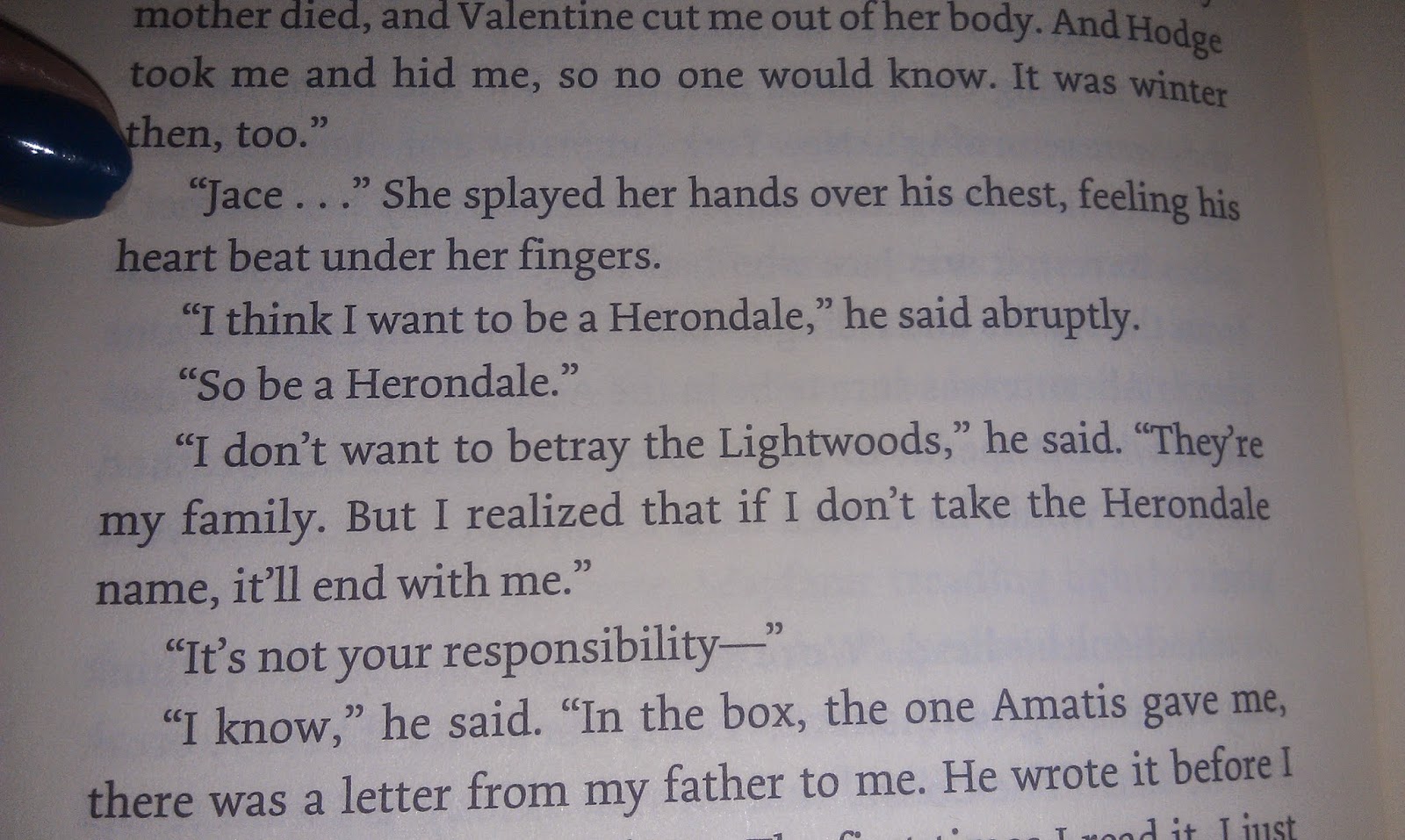 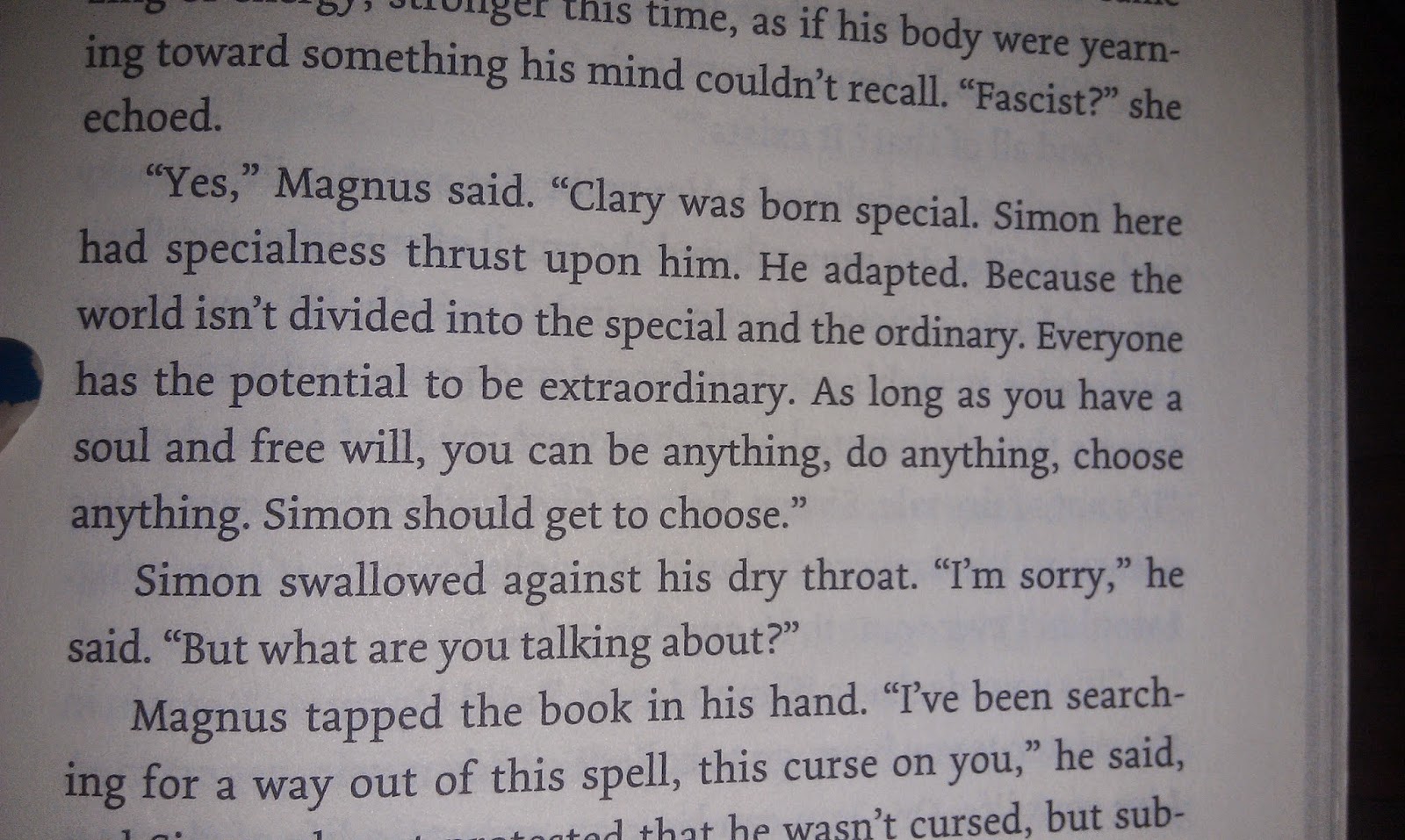 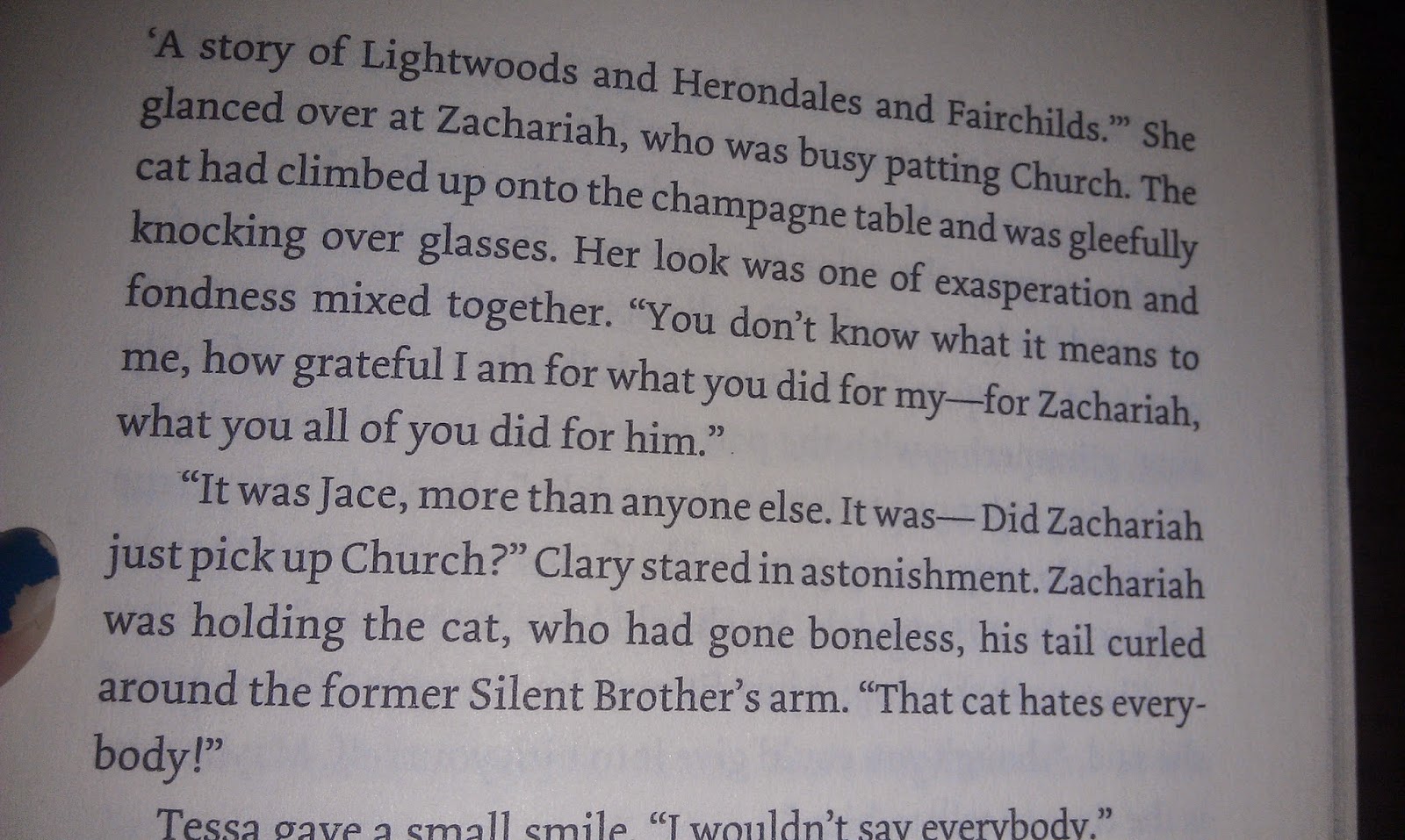 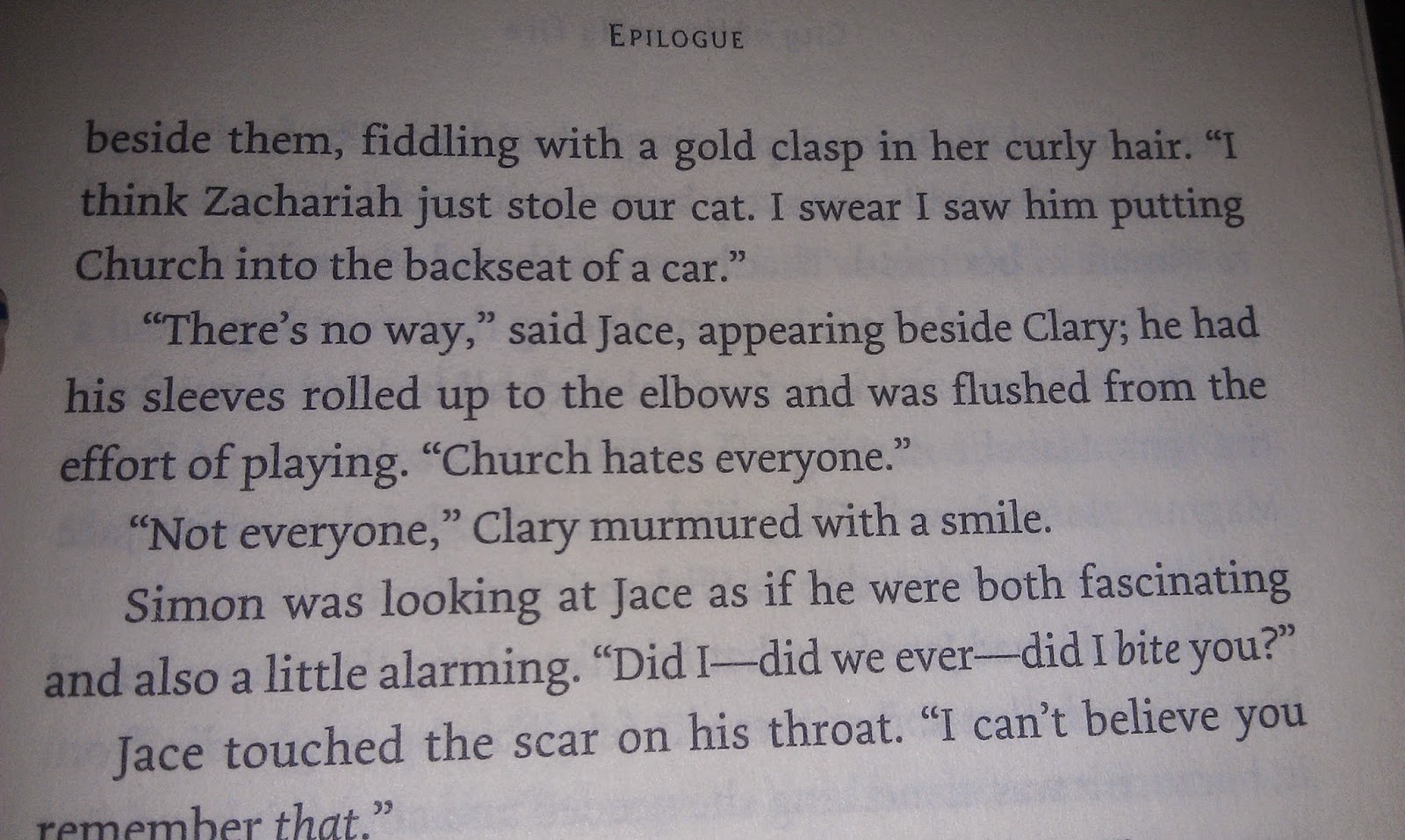 Cassandra Clare was born to American parents in Teheran, Iran and spent much of her childhood travelling the world with her family, including one trek through the Himalayas as a toddler where she spent a month living in her father’s backpack. She lived in France, England and Switzerland before she was ten years old.
Since her family moved around so much she found familiarity in books and went everywhere with a book under her arm. She spent her high school years in Los Angeles where she used to write stories to amuse her classmates, including an epic novel called “The Beautiful Cassandra” based on a Jane Austen short story of the same name (and  which later inspired her current pen name).
After college, Cassie lived in Los Angeles and New York where she worked at various entertainment magazines and even some rather suspect tabloids where she reported on Brad and Angelina’s world travels and Britney Spears’ wardrobe malfunctions. She started working on her YA novel, City of Bones, in 2004, inspired by the urban landscape of Manhattan, her favourite city. She turned to writing fantasy fiction full time in 2006 and hopes never to have to write about Paris Hilton again.
Cassie’s first professional writing sale was a short story called “The Girl’s Guide to Defeating the Dark Lord” in a Baen anthology of humor fantasy. Cassie hates working at home alone because she always gets distracted by reality TV shows and the antics of her two cats, so she usually sets out to write in local coffee shops and restaurants. She likes to work in the company of her friends, who see that she sticks to her deadlines.
City of Bones was her first novel.

city of heavenly fire review sad the end yet happy