Giveaway! Enter to win Drawn to Fight: Zac and Evie by Lilliana Anderson 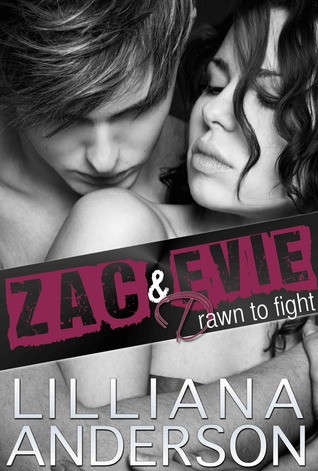 New Adult romance, for 18+ only due to sexual content and adult themes Drawn to Fight begins a new series in the world of the Drawn Series, following Redemption and featuring, Damien and Etta's daughter, Evie, in her own coming of age drama filled with angst, love, passion, need, and a healthy dose of obsession. Zac Rivers. A boy no one wanted to know. Always angry. Always fighting his way in and out of trouble. It was no surprise when he was expelled from school and never heard from again. Until now. I found him at the Londonderry Brawl, and I watched him fight like an animal. Strong. Controlled. But desperate. I sensed in him a purpose – a need to win – and I wanted to know what was so important to him. The way he fought was mesmerising, and I couldn't take my eyes off him. Then, it was over, he'd won and I needed to leave. He didn't want me to. When his lips met mine, somehow, he stole my heart, and in that moment, I knew my world was forever changed. I needed to know this boy. I needed to discover all there was to know about him or I'd never be able to breathe again. No one thinks we should be together. They say his bad news. Well, people say I'm bad news too. Then, as fate would have it, I was forced to introduce him to my most fierce protector. A man whose past is riddled with secrets and mistakes; a man who fought his way from the darkness and into the light; a man called Damien – my father. My name is Yvonne Rhodes, although, you may prefer to call me Evie. I'm the eldest daughter of Damien and Henrietta Rhodes. Inside me, I have my mother’s sense, and my father’s passion. This is Zac's and my story. It's about needing someone to the point of obsession. It's about losing control, and finding a way to pick up the pieces when everything seems broken. And it's about love. One that's so strong, nothing can stop it.

Plus check out the rest of the Drawn series:
SALE on Drawn Series bundle
Only .99!
Go to Amazon to purchase your copy.

Sale lasting weekend of March 14&15 so you gotta be quick!

Australian born and bred, Lilliana Anderson has always loved to read and write considering it the best form of escapism that the world has to offer. Besides writing Angelien's biographical trilogy, she also writes contemporary romance and drama all based around Aussie characters.
When she isn't writing she is a wife, and a mother to four children. She has worked in a variety of industries and studied humanities before transferring to commerce/law at university.She currently lives a fairly quiet life in suburban Melbourne.