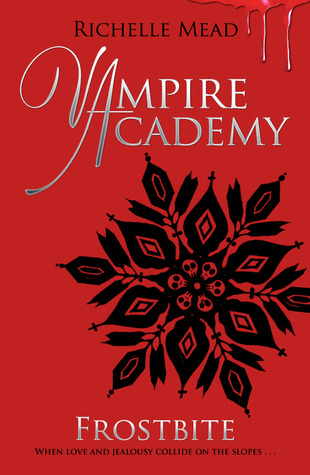 Chapter 21:
First sentence:
This was so not what I needed right now.

So Rose and the others manage to escape thanks to Christian and his fire, they get up in the house where they're being held. They all get out but Rose, but then Mason comes back and.... he gets killed. So sad..

I expected a biting remark, but he simply handed the gun over with shaking hands.

Chapter 22:
First sentence:
Horror and shock consumed me, so much so that i thought my soul would shrivel, that the world would end right then and there - because surely, surely it couldn't keep going on after this.

Mason's death is really a shock to Rose (and the rest of us, too), however it gets her to kill the jerks. After everything she realizes what has happened and she even breaks down in her mother's arms of all people. Kind of a sweet moment from them, just too bad Mason had to die for it.

Dimitri's arms wrapped around me as he helped me up. Voices swarmed around us, and one by one, I regonzed people I knew and trusted.

Chapter 23:
First sentence:
The weather warmed up on the day of my molnija ceremony.

So since Rose killed Strigoi she gets her Molnija marks, but it's not at all how is should have been since Mason died.
Rose and Dimitri also get a chance to talk and he tells her that he isn't gonna take Tasha's offer, because he doesn't have those kinds of feelings for her, but he has them for Rose. And then awww kiss. Nothing is solved really, but at least we can enjoy the moment between them.

He shrugged. "Whether they know that fact or not doesn't matter. What matters is that someone - that you - know me that well. When a person can see into your soul, it's hard. It forces you to be open. Vulnerable. It's much easier being with somone who's more of a casual friend."

And the end. End of book two already.